Happy new year! (somewhat belatedly...) I hope 2016 is off to a good start for you and yours. For us, life continues on in it usual hectic manner. Aaron started working again in December, so we're all adjusting to having both of us out of the house full-time. It's a big change but a very good one.

Since I last posted, Maisie's fenced in two tournaments!

The first was in December, Windy City Super Youth Circuit (SYC), in Chicago. This was a tournament of many firsts: her first traveling tournament, and her first time fencing kids from other sword clubs. She did quite well!

She and I arrived on Friday morning. Her event was Saturday, but we didn't know at what time, so we came down a day early so as not to cut it too close... and to have some free time in Chicago! After checking in at the hotel, we hopped on the El to downtown. We stopped by Cathy and Jim's office for a brief but lovely visit, then we went over to the Christmas market! I'd heard a lot about it but had never been before. Maisie had hot apple cider, in a keepsake little booth-shaped mug, to warm up! 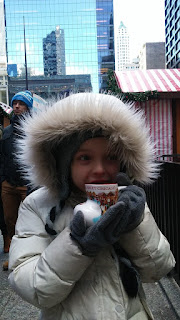 The whole time she was like "My friends are in school and I'm in Chicago!!" like she couldn't believe it.


Saturday was the big tournament day! 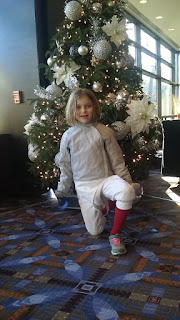 Maisie was ready to go. There were 9 girls in her age/weapon group, and in fencing tournaments, the top 8 are awarded medals. So her goal, which seemed really achievable, was to medal. (Also I did NOT want to see how upset she'd be if she were the only one who didn't medal!!) So with that, we were off and fencing... 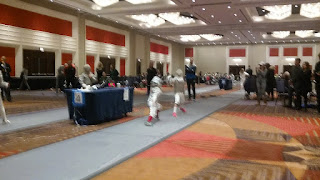 The tournament itself wasn't the best-organized for the girls. There were 3 strips going, so as soon as one bout finished she'd get her mask off but would immediately be called to her next bout. There wasn't a chance to take a breather or listen to her coach!

At the end, she made her goal, placing 7th. 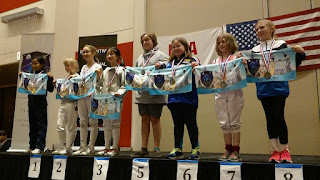 I was (and am) so proud of her! She worked really hard. I think she was a little disappointed in herself, but it ended up a very positive experience.

Then yesterday was another small tournament at our home sword club. This one only had TWO girls in the age/weapon category - Maisie and her buddy Inga. They fenced two bouts - a seeding round that Maisie won 5-3, then they did the final bout, which goes to 10. Maisie got down 1-6, fought back to bring it to 9-9, but ended up losing the match point. She was incredibly disappointed, cried a lot, and asked to go home immediately afterwards instead of sticking around to watch other fencers.

She perked up when I asked if she and Ella wanted to go to the Mall of America to ride the rides, and even ended up putting her medal back on and smiling about it. 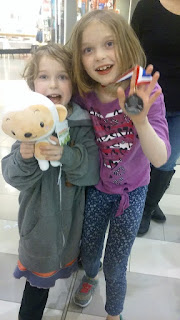 Next up for Maisie is the North American Cup, in Salt Lake City in March. I've never been to SLC before. I'm looking forward to it! She's excited about seeing mountains for the first time, and seeing some of the girls she met in Chicago.

She's really enjoying fencing, and I'm really proud of how well she's doing. She's working hard and seeing the results! It's a lot of fun to watch.
Posted by Leah at 6:55 AM

Some of our friends